After a long paddleboard workout, I used the chocolate veg protein mix in a smoothie with lunch in hopes for a fast recovery. It did seem to help.

The next morning, I added a tbsp of peanut powder and had a smoothie breakfast.
Mixing:

I’m using Flax milk this week because it is good and the shop I went to had it and not almond milk.

Juice for a new decanter:

This morning’s juice was fabulously mild with a slight parsnip after taste.  I made enough for at least two juices.  I found a BPA free decanter on clearance so I can store it airtight and it will retain more vitamins longer.

I was planning a splurge meal for dinner this night, so I wanted to save up some calories. Instead of putting a banana and peanut powder in this morning’s smoothie, I had a cinnamon apple on the side. The smoothie was not AS good but still tasty.
4 ice cubes
1 cup flax milk
1 scoop chocolate protein
1 Tsp cocoa

I wanted to see what a smoothie with all of my favorites would be like. It did not disappoint!!! I did need a workout later. 8) 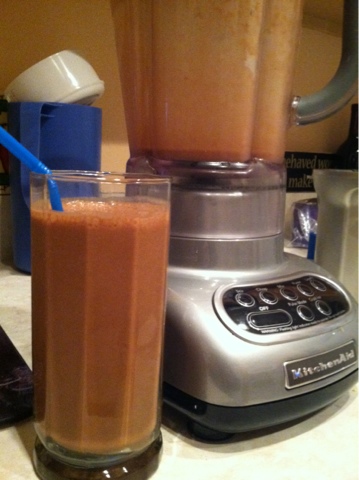 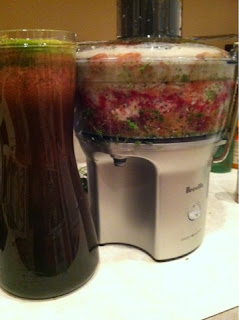 Last night I juiced everything. I started and just couldn’t stop.
A warning about this one: cilantro is powerful, use sparingly.

Side of apple slices with cinnamon, 65 calories.